Use Graph API batching to speed things up?

In this article, I will focus on how I’ve used batching with graph API to reduce the execution time from 14 min to 1 minute and 13 seconds. 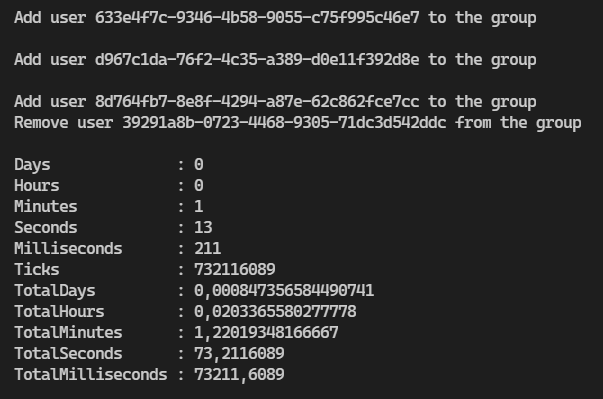 Note: Initially, I had to populate Exchange distribution lists (and security group with mail enabled) instead of Office365 groups, but I’ve discovered that only Global Admins can modify group membership through graph. A regular user can’t, even if he owns the group.

If you’re interested, you can find a demo code here.

Here the most important line, /servicePrincipal is to query Enterprise applications where /application is for App registration.

This will give us the first 999 elements (groups in my case) assigned to this specific enterprise app. With more than 3k groups, we must deal with paging. I’m using the Get-AADAppRoleAssignedTo function as helper. You can find it in the loadme module.

Now we have all groups, we just have to flat everything and add the result into an array. Here the main line again:

If we have more than 99 members per group, we will have to manage paging again then store the result in a big array. This is the bad part, because we will have to call Graph API more than 3000 times in our case. The basic 3000 calls because of the number of groups and more if you have more than 99 users in some of them. In my case this part takes between 12 and 14 minutes. I’m using the Get-AADGroupMember function as helper available in the loadme module again.

Now that we have an array full of duplicates, let’s simply clean it with:

Compare with the current group we want to sync

If you’re more a visual person, the process look like this: 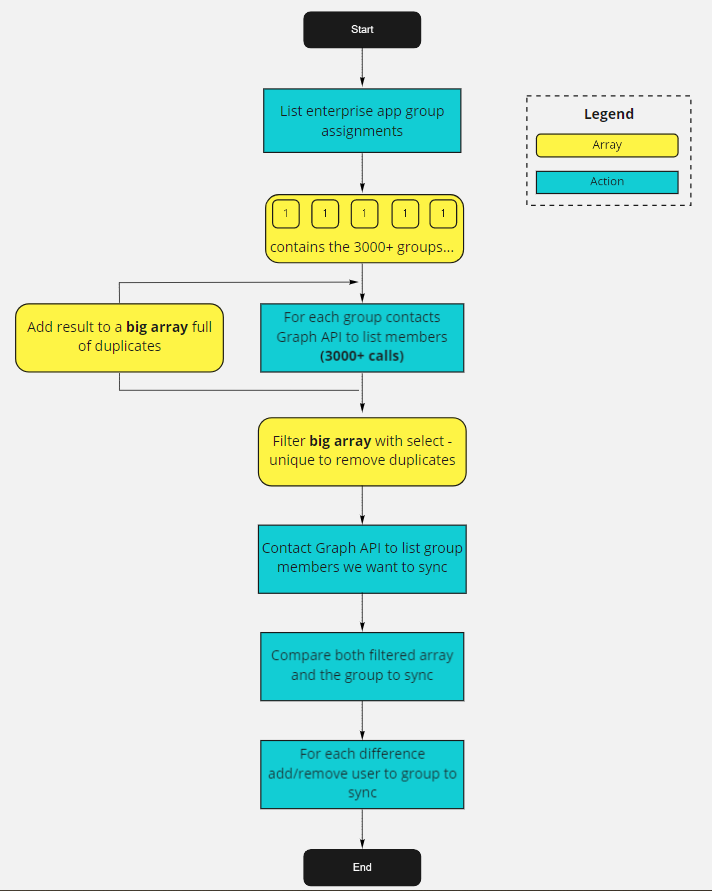 14 min, is not acceptable in my case. If I have 10 groups to populate, it can take a serious amount of time, so what can I do? My first thought was about parallel processing with runspaces but quickly I’ve decided to drop this idea to try the Graph API batch processing.

Long story short you format up to 20 requests in a single API call and graph API does the job for you. In other words, in our case we divide by 20 the number of direct graph requests.

Here the big picture of the plan:

Here an idea of the code:

And that’s it 😊. For the rest, it’s like the long version where you compare the result between the current DL and the filtered array to then add/remove users accounts. The only difference is that now instead of 14 min, it takes less than 2 min.

Again if you prefer pictures, here a high level overview: 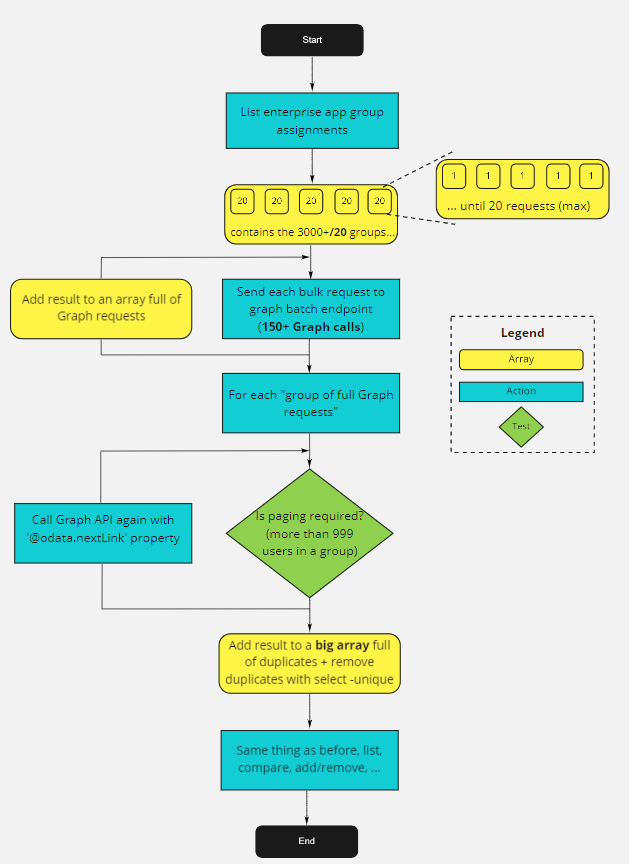 What about Azure AD?

Because we don’t want to be over privileged with application permission, we will have to create a service account that we will use to add/remove members with only delegated permission. To be able to run the GraphBatch.ps1 script, you will have to configure few things first:

Now we’re good to go and only the groups we own can be modified (not all tenant’s groups).

Nothing complicated in this article, Graph API batch seems to be a good fit when you have to do a massive number of queries. If you wonder why I decided to take this path, I will answer this question during the next article(s). But in short, I wanted to learn ACI (Azure Container Instance) and this dynamic group automation seems to be a good candidate. In addition, with ACI, it’s a per seconds billing, so a 2 min run will be cheaper than a 15 min run (no really???). See you for the next one.

How to use modern authentication

Introduction I’m learning modern authentications since several months and I still learn new things every day! I’m super happy to publicly share what I’m doing on my free time and I hope it will he...

Introduction Now that we covered basics in the previous article, let’s go a step higher and build a multi-tiers application composed in our case with a frontend (Powershell console) and a backend ...

Kubernetes is not the only way...