I have this question in mind since several months… What would I do if I wanted to run Active Directory (AD) queries from Azure without a VPN gateway? Basically, I wanted to do a quick Proof Of Concept (POC) with the hybrid connector (HBC) for app service. PS Remoting with HBC over azure function (Windows Operating system) is not new. But because I like challenges (or because I’m stupid…) I’ve decided to test with a app service hosted on a Linux OS since the feature is GA. In other words, the plan will be to use a Powershell Linux container hosted on an app service, enable the hybrid connector, do a PS remoting session on an on-premises domain joined Windows box to finally reach Active Directory… What could go wrong?

You can find the code here.

During this article, we will:

This machine must be domain joined. According to the hybrid connector documentation, the machine has to be at least a Windows 2012, I’ve personally used a Windows 10 machine.

Next, we will have to create a winrm HTTPS listener which allow basic authentication (winrm set winrm/config/service/auth ‘@{Basic=”true”}’). There is a lot of documentation around this topic. I think I’ve followed this one. After several fails with NTLM, I’ve decided to go the basic authentication way over HTTPS. It works with NTLM when you use Azure function, I guess it should work with Linux too. But I never succeed to make it work.

Note: I’ve used a self-signed certificate during this POC.

Next, we will create a new local admin account. Local admin because this is the quickest way to use PS remoting sessions. I’m sure there is tutorials to allow non-admin users to connect.

That’s it for now, we will come back later on this machine.

Then, I’ve added 2 configurations in the web app’s app settings:

This represents the credentials (local creds previously created) that our web app will use to instantiate the remote session to the on prem machine. Doing this avoid hardcoding login/password into the script. As usual, a more secure approach is to use a Keyvault and a reference link.

Once the App Service is created, go to network and configure the hybrid connector once done (follow the doc), don’t forget to download the agent (Download connection manager) we will install it just after.

Step3 – Back to the remote machine (on premises)

It’s time to install the hybrid agent we’ve previously downloaded. Simple to install, next, next sign-ins with your AAD account and you should be connected:

The last step is to store your corporate password encrypted with a specific key (more info later). Here the code you can use on the device to protect your password:

Keep the $Key in your clipboard you will need it later. We’re done with this machine, let’s built our API hosted in the cloud!

For simplicity, I’ve used the same AAD application I’ve created in the previous article where I have app roles defined (read.access, write.access, admin.access) in my app registration. I will use almost the same code as before for the startpode.ps1. Long story short, I’ve kept the Pode Middleware configuration, removed the previously created routes and added a route called ‘/api/readfromhybrid’ where the $ReadAccessRequired middleware make sure your token is valid and your user authorized to consume this API. If need more information, you can have more info here.

Let’s explain the code of the route:

Create your image from the dockerfile

Then tag your container to match your ACR name

Then sign-in to your ACR

And finally push your container to your ACR

Note: Bad note for Microsoft regarding the admins credential you HAVE TO enable them on your ACR if you plan to use app service for containers. I hope Microsoft will enable the managed Identity feature soon.

Now you have your container in the ACR, configure your app service to use your image: 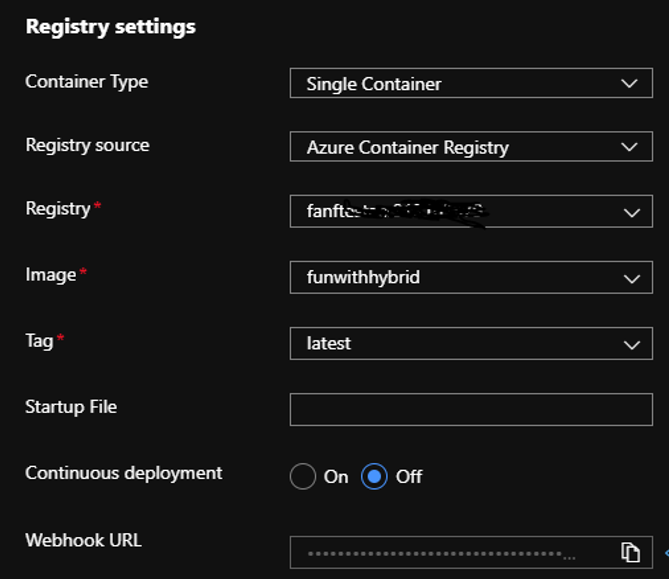 Once your site is up and running, you can take your preferred API client in my case Thunder client VS Code extension and call your API **https://

Because it’s AAD protected (this part is covered in the multiple articles that I’ve published already), if I try with an expired JWT token, I receive:

If now I use a valid token:

Note: For this POC, my remote endpoint is a remote machine connected to a domain controller via VPN because why not… In other words, the flow goes from the web app to the hybrid connector (Service Bus) to my laptop connected to a remote DC trough VPN. In addition, I have several apps running already on this cheap app service plan. This is why (I hope) it’s not uncommon to wait more than 10 seconds … But it works!

I can run AD queries from a Linux container protected with Azure Active Directory without VPN. Challenge completed!

The PS Remoting over WSWAN on a Linux machine was a big pain. PS Team recommends using SSH today, but I can’t use SSH in this case. Quickly I’ve found this article where Jordan Borean explains the reason of my multiple fails… A big thank you to him for both this article who popularizes this complicated topic and for the PSWSMAN module.

Pain2 – Re-hydrate the credentials on the remote machine

My first try was to use Azure ARC and my function to retrieve credentials from Keyvault with the local MSI endpoint. Sadly the ARC agent is running under the network context and not the local user one. In other words, I never succeed to fetch an access token. Then my second idea was to use a ConvertTo-Securestring with CLIXML commands, sadly the Hybrid agent is running in a different context again … Therefore, I’ve decided to generate my own AES key and then use it to encrypt/decrypt a file. User context doesn’t matter in this case.

Between Docker, Pode, Azure web app, the Hybrid Connector and finally the remote machine itself, trust me that I’ve created a LLLOOOTTT of containers before the solution be a success … The lack of logs was real.

This POC is not free of charge.

It’s still far cheaper than even the smaller VPN GW you can configure.

It cost me 0,7 € and I’ve used the basic SKU without egress or build time. From the doc you can see:

To use the hybrid connector, you can’t use the consumption tier but instead the Standard and above. I’ve decided to use the S1 (cheapest in my case) which cost me something like 10 € for the week. When you check the doc, you can see:

I personally run several apps on this app service plan so the cost is not “crazy”.

As a big fan of JEA (Just Enough Admin) endpoints, where you can control who can access to what (among other things) but only from an AD domain, now I know I can bring Azure AD and modern authentication to the picture too. When you think about it, controlling an on-premises PS endpoint from Azure is cool don’t you think? If you plan for intensive requests on AD, I guess the VPN should be a better option. At least it can be an interesting test to do.

Anyway, before closing this article, I wanted to thank again both Jordan Borean for his amazing work on the PSWSMAN module and Matthew Kelly for his wonderful Pode module.

See you for the next one.

How to use modern authentication

Introduction I’m learning modern authentications since several months and I still learn new things every day! I’m super happy to publicly share what I’m doing on my free time and I hope it will he...

Introduction Now that we covered basics in the previous article, let’s go a step higher and build a multi-tiers application composed in our case with a frontend (Powershell console) and a backend ...

Build a Powershell API with Pode

Use Graph API batching to speed things up?